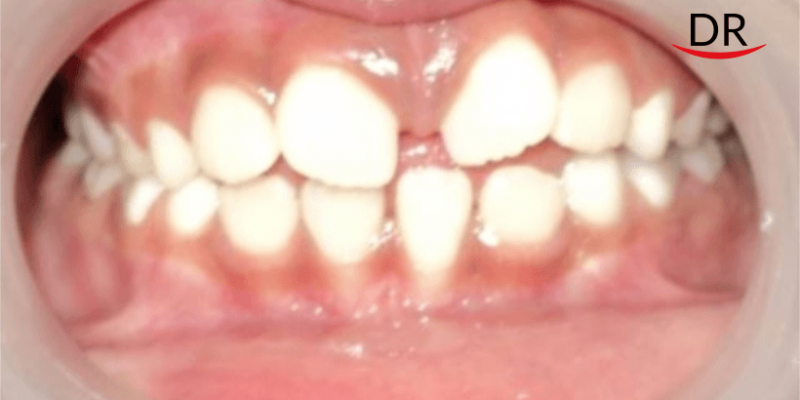 In children, immature teeth ie teeth with incompletely formed roots or root apex, are commonly seen in children. In such teeth, endodontic treatment if required, has to be done in stages. Single sitting RCT is avoided and treatment takes a typically longer time. It is important that parents of the child are thus counselled in this fashion.

An 8 year old female patient reported to the clinic, with the chief complaint of on and off pain in upper right and lower left back tooth region since 20 days.

Patient was completely asymptomatic 20 days back then she experienced pain in upper right and lower left back tooth region which was spontaneous in origin, intermittent type and patient required medicines in order to relieve the pain.

On intra oral examination, a grossly decayed lesion was seen in 16. Deep carious lesions were seen in 26 and 74 and incipient carious lesion was seen in 75. Vestibular tenderness was seen with 74 and vertical percussion elicited pain. The dentition was mixed dentition, with a Class I molar and canine relationship. The overjet and overbite could not be predicted as 11 and 21 are in the erupting stage. No abnormality was detected on soft tissue examination.

Provisional diagnosis was chronic irreversible pulpitis in 16, chronic periapical abscess in 74, and dental caries in 26 and 75. The diagnosis were confirmed with radiographs. The radiograph revealed a radiolucency involving pulp and incomplete root formation in 16.

For the preparatory phase, oral prophylaxis was performed and oral hygiene instructions were given.

For the corrective phase, revascularisation/apexogenesis was done, followed by cementation of stainless steel crown for 16. Caries excavation and review was done in 26 followed by stainless steel crown. A GIC restoration was placed in 75. A band and loop space maintainer was given for the extracted 74. The patient was kept on periodic recall and follow up every 3 months.

First, local anaesthesia was administered followed by access opening of pulp chamber in 16. After copious irrigation and filling, the canal was dried and triple antibiotic paste was placed into the canal till CEJ. The patient was scheduled for appointment after 3- 4 weeks.

At next appointment the the triple antibiotic paste was rinsed and a sterile K file was placed beyond the apex to induce bleeding. A clot was allowed to form at CEJ. The pulp chamber was sealed with MTA and the tooth was temporarily sealed with a Glass ionomer sealant. Root maturation was radiographically followed up for a period of 12 months.

Management of nonvital young permanent teeth present the clinician with numerous restorative and endodontic challenges. Traditionally, the most popular method for managing such teeth has been by apexification using calcium hydroxide. More recently, the use of MTA to create an apical barrier, followed by placement of a bonded core within the canal to strengthen the weakened roots has been the standard of care for non-vital teeth with open apices.

Even though both these approaches have been used successfully over the years, both modalities have few important, well documented drawbacks, one of which is the lack of continued root development. This has led clinicians and researchers to search for alternate strategies to promote continued root development even in young permanent teeth which have lost pulp vitality.

One such strategy is the pulp revascularisation approach. Early attempts yielded inconsistent results and histologic examinations failed to demonstrate the regeneration of pulp-dentin complex.

The promising outcome from these reports has caused a paradigm shift in the approach to management of immature teeth. Now there is greater emphasis on conservative, biologically based methods that allow regeneration of a functional pulp-dentin complex.

Apical barrier formation with MTA is an alternative approach to apexification as it gives instant results and does not require long term follow ups for the formation of biologic barrier – but the treatment depends on the economic status of patient.

Pulp revascularisation represents a recent and promising therapy for immature teeth, recommended as an alternative to apexification in cases of endodontic treatment of irreversible pulpitis and pulp necrosis, whether or not associated with periapical lesion.

It is a technically simple treatment with advantageous outcomes like thickness of the dentin wall width and apical closure, avoiding weakening of the tooth.

Journey Of Oral Health: From Mother’s Womb To Adolescence