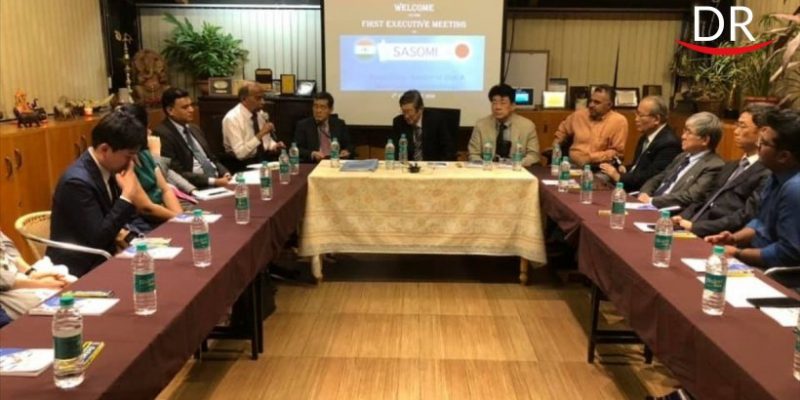 The inauguration ceremony was preceded by the lightning of the lamp to mark the opening of the ceremony along with the small auspicious ceremony of painting the eye of a Daruma doll as per Japanese culture. The cultural culmination from both the Nations was highly appreciated gesture by all the students staff and higher authorities present in the function.

A memorandum of understanding (MoU) was signed by the dignitaries to officially mark the launch of SASOMI followed by the felicitation of all the Japanese dignitaries and Padma Shri awardee Dr.BN Gangadhar. All members on the dais were felicitated along with distinguished members present in the audience including principals, deans and directors of various institutions.

The introductory session was addressed by Japan consulate general Mr. Kitagawa who spoke at length drawing cultural & religious similarities between India and Japan. Similarities in language, mythologies, worshipped idols are very much similar and seemed to have been derived from a common thread.

The first scientific session was delivered by Prof. Dr. KS Nagesh who mostly spoke about the present scenario and future trends of dentistry in India and how & what Indian dentists can replicate from the Japanese counterpart. Coming up with next session was by the most energetic and most enthusiastic Prof. Dr. Kamichi Seto, at the age of 80 has energy levels comparable to teenagers. Dr. Seto talked about how the Japanese government entrusted him to establishment multiple billion-dollar centers to research and treat cancers. His major focus was on Oral Oncology, Maxillofacial Trauma Material Sciences And Implantology. His case records are the life examples whose prognosis was highly commendable as the PET scans are the proof of how efficient his research and treatment is. The approach used by him and his colleagues included Proton Beam Therapy and Boron Neutron Capture Therapy which are the newer techniques for non- invasive cancer therapy.

The following session was taken up by Prof. Dr. Jun Shimoda who showed various methods and techniques to preserve the alveolar bone and to immediately replace the extracted posteriors. The technique of hydraulic crystal device approach for sinus lift was thoroughly discussed.

The next lecture was the most interesting one given by Prof. Dr. S Girish Rao who showed clinical cases before and after procedure of patients requiring radical dissection surgeries for cancer removal with the main aim being rehabilitation of individuals so that they can live in normal social life.

The post-lunch sessions were started with Prof. Dr. Anandakrishna GN who focused on 3D scanning and 3D printing of biocompatible implants that makes the implant design very specific and personalized to each patient so that high levels of acceptability can be achieved.

Following sessions were joint collaboration of various professors and doctors from the Japan. One of such session was about the development Of Novel Florescence Diagnostic Method For Early Detection Of Cancers. Tagged globulins on tumors were targeted by the researchers which illuminated upon scans revealing the type and extent of the tumor.

The ending session of SASOMI was concluded with round of panel discussion regarding various approaches and ideas which could take the future of SASOMI to the next level in the world both academically and from the market point-of-view.