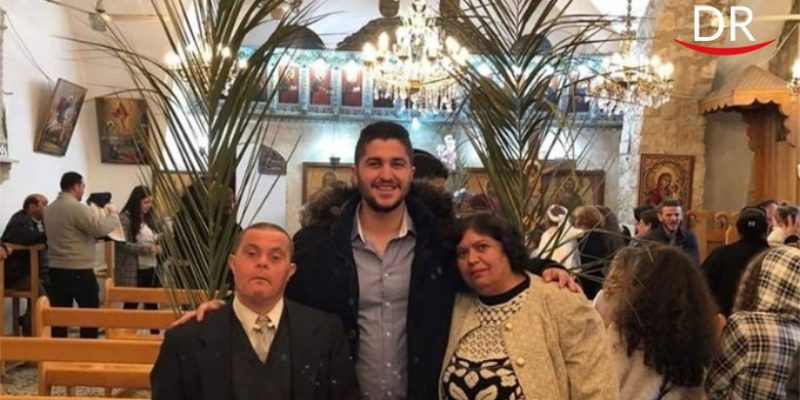 The honest story of a Syrian future dentist has touched the hearts of millions of users around the world and will soon become the basis for a documentary in support of people with Down syndrome.

Sader Issa is a 21-year-old student and future dentist. He studies and lives with his parents in the small village of Al-Baida in northwestern Syria. Sader has an unusual family. His dad has Down syndrome, but the extra chromosome did not stop him from becoming a loving and caring husband and father, whom the whole family is proud of.

“Many women, having learned that their child will have Down syndrome, believe that this is the worst life scenario, and decide on an abortion. I am happy that my grandmother had a different opinion. Otherwise, I would not have been born, ”says Syrian resident Sader Issa.

He is 21 years old. Sader’s father, Jad Issa, has an extra chromosome. But this does not prevent him from being a better father, husband and head of a happy family.

The story of Sader and his dad recently began to spread virally on the network – publications about them appeared in Spain, Britain, USA, Brazil, Australia, South America, Asia and Serbia. We decided to talk about this family in India.

In interview Syrian Society for Social Development Sader talked about how his father raised him and took care of him. “If I could choose my dad myself, I would not dream of anyone else,” he says.

Sader’s parents got married 23 years ago. The choice of the bride did not bother anyone, although Jud was three years younger than his wife and he was diagnosed with Down syndrome. Jada in the village was known as a hardworking, executive and kind man.

Also read:  WHO Unveils Plan to Improve Oral Health by 2030

Two years after the wedding, a baby was born, and dad did everything to provide the child with the necessary and give him a happy childhood. Despite his health problems, Jad worked at the mill for 21 years. And even now, he sometimes comes there to help with the simplest job – sweep the floors, sprinkle grain. This small side job helps him, along with all other villagers, to contribute to the family budget.

In the old family photo – Jud with his wife and little son. “A child who grows on the lap of an infinitely loving father receives as much love and tenderness as no one else,” says Sader.

Sader says that his father, despite obvious difficulties, did everything so that his son would live a normal life like all other children. “While I was studying, Dad supported me very much – financially, psychologically and in all other aspects,” he says. And although according to Sader, people with Down Syndrome consider society “vulnerable and dependent”, Jud worked on an equal basis with everyone, every day proving that he was no different from the rest – so much dad wanted to provide his child with a normal life.

The example of his father motivated Sader to try to become better, to achieve everything possible for the sake of the man who worked so hard for him. Talking about his parents, Sader emphasises that their family is no different from thousands of others: “They, like many, quarrel and make peace. There is a lot of love, simplicity and humility in their life. ”

Jad is very proud of his son and what he has achieved, and openly shows it. “Every time dad introduces me to a new person, he says:“ My son is a doctor. ” I see pride and joy in his eyes. It’s like he’s trying to say: “Look, I have Down syndrome, but I raised my son, and did everything so that he could become a doctor and help others.”

The son was never shy about his father. In the village, Jada is respected for its simplicity and openness and does not consider him a "black sheep".

A large documentary will be shot soon about the Issa family. In the meantime, Sader talks a lot about his father on social networks. He considers dad a living example of the fact that a person with an extra chromosome can live an ordinary life – work, get married, raise children.

“I would like all people to recognise that to be different is not a shame. People with Down syndrome may be different from others, but they have feelings, dreams, and mind. They are able to live a normal life if society supports them. Let's give them a chance and see what great opportunities they have, ”says Sader.