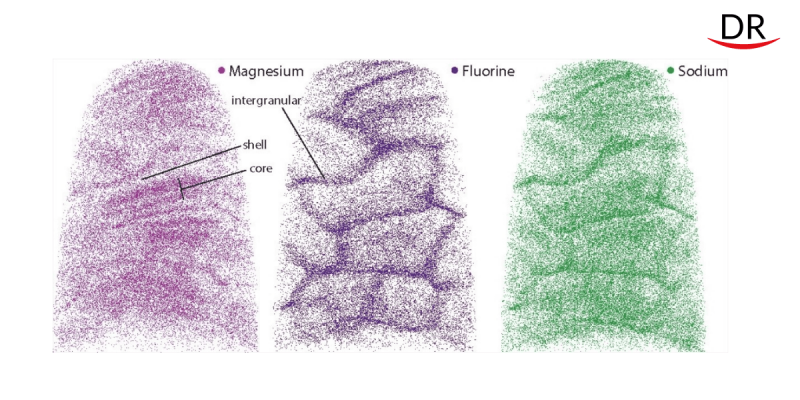 Tooth enamel is composed of tightly grouped elongated crystals about 1000 times the width of a human hair. These tiny crystallites are composed primarily of a calcium and phosphate-based mineral called hydroxylapatite, but this was only general information. A recent study by scientists from Northwestern University, led by Professor Durk Joester, provides more detailed information on the atomic composition of enamel. This will enable scientists to better understand tooth decay and its causes.

Professor Joester and his colleagues used atomic probe tomography and advanced Scanning Transmission Electron Microscopy (STEM). Thanks to this, it was found that the crystallites of human enamel have a core-shell structure. Each has a continuous crystal structure with intermittently spaced calcium, phosphate and hydroxyl ions. However, the structure is heterogeneous and contains many impurities. For example, in the very center of the crystallite, a huge amount of these ions of calcium, phosphate and hydroxyl is replaced by magnesium, sodium, carbonate and fluoride. The core also contains two layers, both rich in magnesium. They surround sodium, fluorine and carbonate ions.

Scientists suspected that the irregularities introduced by the magnesium layers were causing deformation spots in the crystallite. Computer simulations supported their guess, predicting higher core voltages than shell voltages.

Also read:  RGUHS to use facial recognition of students

The destructive processes of tooth enamel really depend on genetic characteristics. They are associated with the behavior of dissolved crystallites, which are able to make enamel more durable, and are also capable of rapidly destroying it.

When the researchers exposed the crystallites to acid – similar to what happens in the mouth – the core showed more erosion than the shell.

“The new information will allow us to model enamel degradation using models that were not possible before, and will help us better understand how caries develops,” said study co-author Karen DeRoche, a graduate student in the Department of Materials Science and Engineering at Northwestern University.

Guidelines for Reporting COVID-19 in the Workplace